Raman Kapoor as Suleman Chacha is thrilled to be a part of ’372111′. In this project he is playing Sulemaan aka Chacha- A fearsome mafia king who falls in a trap when one of his goon, loses this note of 10 Indian Rupees numbering ‘92P 372111’. The role of ‘Sulemaan’ has been a once-in-a-lifetime opportunity and he is truly grateful for the chance to portray such a diverse character. Trained in acting by ‘Barry Johnes’ this is Raman Kapoor’s second Short Film. Before this Raman Kapoor also protayed ‘Rohan’ in ‘Wake up Rohan’ by the same production, which was featured in ‘Cannes Film Festival’. Along with acting he enjoys singing and has found the challenge of a live show thrilling.

Rahul Aamath as Vishnu hailing from Jaipur, Rahul is a professional theatre actor. He has played eminent role in many theatre plays. Yes ‘many’ here  literally means many’. Before you get judgmental I would like to mention one thing that will clearly vanish every single question about his brilliant acting capabilities. He played ‘Vito Corleone’ in the theatre adaptation of ‘The Godfather Trilogy’. Oh Yes, his impersonation is of that standard. He has got both ‘Marlon Brando’ & ‘Robert De Niro’ in him. Just like them his pure good looks are a bonus along with his mesmerizing acting skills. In this movie he is playing the main protagonist of the story. He looses that precious ’10 Rupees note’ and gets into a big mess. His journey to find that lost note is the key plot-line of the film.

Rajeev Sharma as Khalid is a pure core Kashmiri actor. To his credit stands a long list of TV serials & theatre plays. He has worked with bollywood stars like Imtiaz Ali, Manoj Bajpai, Piyush Mishra, Ravi kishan, Dipak Dobriyal, Mukesh Tiwari,Yashpal Sharma, Himani shivpuri, Annu Kapur, Milind Gunaji… Oh! its really a long long list. Well cutting it short lets come to our movie ’92P 372111′ In this movie he is playing another goon of Chacha’s gang. Let me reveal you a secret- ‘Its a key role’. Watch it to find out what mystery he unlocks.

Vinod Vidhyathi who is playing ‘Tha Halwai, Sewaram’ is the centre point of this ‘Hawala circle’. Basically a Banker by profession Vinod is making his debut with this project. He has never performed before this production, but has really enjoyed his first experience. While shooting in the midst of a crowded market, he was not at all camera consious and performed the character very well. He would like to thank the production team for welcoming him and hopes to learn more about acting in future projects. 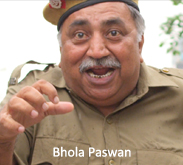 Pickpocket: Manoj Yadav who plays the role of a Pickpocketer started his career with a well known socio-political theatre group “Asmita Theatre” in 2009. Manoj wishes to thank his theatre guru Mr. Arvind Gaur for teaching and polising him enough to chase his dream. In this movie he is the creator of the ‘Mess’.He is truly grateful for the chance to portray such a diverse character.I am sure you will be mesmerised by his acting as he has adapted that character so well.

Raj Sharma as Neta ji has a small but vital scene in the movie. He has played many roles in theatre shows over the last few years. Raj Sharma is a well known name in the theatre fraternity of Delhi. Currently he is working in ‘Kingdom Of Dreams’ and will also appear in the upcoming Raju Hirani’s movie- Peekay, staring Amir Khan & Sanjay Dutt. He is an avid reader and enjoys collecting rare books.